Whale-watching on the Gold Coast is truly spectacular With one of the longest continuous whale-watching seasons in Australia, the Gold Coast in Queensland is quickly becoming the best spot for whale-watching on the planet.

We spoke to whale expert Laura Torre-Williams about why whale-watching on the Gold Coast is her favourite place to be. Whale-watching on the Gold Coast

During whale watching season, the term being “mugged” takes on a very different meaning – and you might be surprised to find out that in this case, it’s a good thing.

“Mugging” is when a pod of curious humpback whales completely surround your whale-watching boat, so that there’s nothing you can do but shut off the engines and soak up the presence of these gentle giants. And suffice it to say that seeing adult whales – measuring up to 15 metres and weighing 30 tonnes – against the backdrop of the Gold Coast is an unforgettable experience.

“It’s epic and amazing,” says Laura Torre-Williams, a whale expert who has studied whale behaviour for over 20 years in Hawaii, Alaska, Mexico, California, Australia and New Zealand. But despite the many far-flung destinations Laura’s been, there’s no place she’d rather be than the Gold Coast.

One reason is that the Gold Coast has one of the longest continuous whale-watching seasons in Australia, running from late May to early November with no break in the middle. During this time, around 35,000 humpback whales pass the east coast of Australia on an enormous 5,000-kilometre three-month journey from Antarctica to the warm waters of the Great Barrier Reef. This arduous trip is one of the world’s longest mammal migrations.

But the population numbers weren’t always so high. In the Southern Hemisphere, humpback whales were targeted by illegal whalers in the Southern Ocean. By the 1960s, there may have been as few as 500 whales in the east coast population. In recent years, this group has been increasing by 10 per cent every year.

One factor that accounts for the increase in numbers is the calmness of the Gold Coast bay area, and the warm semi-tropical waters which mean that the whales feel safe there. “It’s like a holiday for them too, coming from the cold waters of Antarctica,” says Laura. “They can relax and chill out.” Because they travel inside the continental shelf, the whales are a lot closer to the shore, meaning that a short 15- to 30-minute boat ride can see you out on the ocean and spotting whales in no time.

There are seven tour operators on the Gold Coast, who offer a diverse array of tours, from large groups to private charter journeys. Laura’s research at Griffith University between 2013-2016 also documented a surprising new phenomenon. Increased sightings of new-born whales in the Gold Coast Bay suggested that the whales were giving birth south of the traditional calving grounds at the Great Barrier Reef, which has changed the thinking around whale migration.

In June and July, the Gold Coast is now one of the best places on the planet to see new-born whales. As Laura notes, “It’s not just the migration corridor anymore… It’s becoming more of a breeding spot and a nursery spot.”

When calves are born, they tend to be three to four metres long and weigh up to one tonne. A baby humpback whale will stay with its mother for a year and the first weeks are extremely crucial. Laura says, “A baby whale, believe it or not, has very little swimming ability. They’re clumsy, floppy and awkward… their tails are curled up and it takes a while for those tails to uncurl and then for the muscles to stiffen so that they can have propulsion. We’ve seen some of them where they’re just trying to beat their tail but going absolutely nowhere.”

While the season draws to a close in late spring, the fun isn’t over yet. This is often when you’ll see the mums and “calves of the season” heading back down the coast and learning new behaviours such as breaching and tail slapping. “People think oh, the season is over, it’s past the peak, I shouldn’t go,” says Laura. “But late in the season is when you see mums and bubs jumping out of the water and figuring out their tricks. It’s beautiful. They’re just looping through the bay like they don’t want to leave and go back to the cold waters.”

It also used to be a rare sight to see multiple mothers and babies travelling together, but due to a growing population, this is becoming more common. “It’s like a creche,” explains Laura. “One of the mums is sleeping, while the other mums are babysitting and the babies are playing together, and then they take turns.”

Throughout the season, it is a different evolving experience. And although humpback whales are the stars of the show, it’s also common to see other wildlife such as dolphins, sea turtles, seabirds, hammerhead sharks and even other whales like southern rights and minkes. 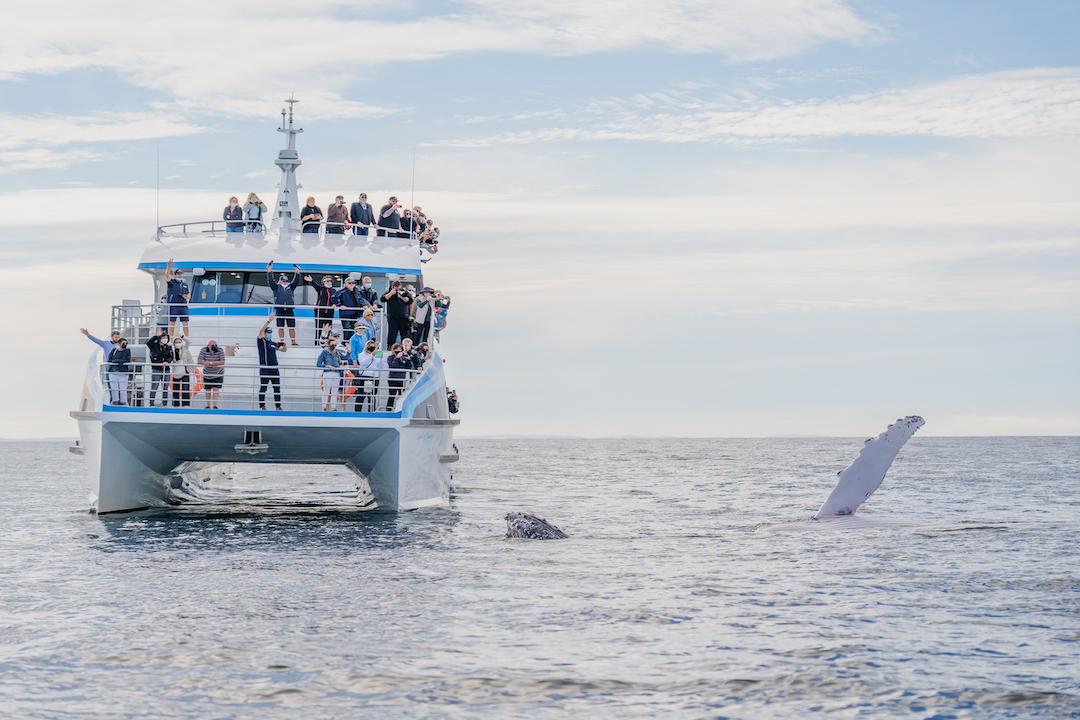 Whale-watching on the Gold Coast gets you up close and personal with humpbacks. Image: Sea World Cruises.

While humpback whales were removed from the federal government’s threatened species list in March this year, Laura says there’s still much education needed when it comes to conservation. “They are still very much threatened by shipping, plastics, climate change and pollution in the seas… I think realistically, if we’ve got our brains and hearts and minds engaged, we know that there are still concerns for them into the future.”

Many of the operators, local organisations and universities spend considerable time and effort on the study and conservation of whales and other marine life in the region. Laura is big on education and conservation messaging.

“On the Gold Coast, we’re really trying to go very heavy on our education messages and our conservation messages. If we’re to have a future, the planet must also have a future. We always ask people to reduce plastics, to be smart when it comes to shopping, to avoid harsh chemicals on your land. It just gets people thinking about these things, and particularly teaching the kids to do the right thing from the start.”

Making efforts with conservation now will help to protect these beautiful, intelligent creatures for many generations to come.

For more whale watching tips and the best tour operators to book with, check out Destination Gold Coast.

Want to explore more of Gold Coast and surrounds? Here’s our top picks.