Dive into the wonderful west – things to see around Perth Things to see around Perth

According to the Noongar traditional owners and custodians of the Perth region, the Swan River was created by the rainbow serpent Waugal, as the river takes the form of a giant snake winding its way through the city.

Nowadays, the river is where the community converges for a love of the water. Everything you can think of regarding water happens here: water-skiing, swimming in the Bicton Baths, fishing, boating and stand-up paddleboarding. Many of these activities also take place offshore at iconic beaches such as Scarborough and Cottesloe. Cottesloe’s esplanade in is jam-packed with food and drink venues that welcome all sandy-footed wanderers. It’s a popular area to linger longer, especially considering that Perth has eight hours of sun per day to bask in.

Besides being one of the sunniest cities in the world, Perth is also one of the most isolated – meaning it has a lot of sky free of light pollution by night. This is why you can see some exceptional sights after dark.

Perth Observatory, for instance, is the state’s oldest observatory, and it’s located only 25km from the CBD. Here you can experience the night sky and full moon tours through the lens of various telescopes. It’s also home to many interesting historical artefacts, including the first-star atlas ever printed in 1729. Close up of a Quokka (Setonix brachyurus) on Rottnest Island. © Tourism Western Australia

For more than 50 years the Rottnest Express has been taking visitors to see quokkas at Rotto, as the island is affectionately called by the locals.

Touching the quokkas is strictly a no-go, but nothing sums up Rotto more than a smiling selfie alongside one. Exploring the island by bike is one option – or you could say the only one, bar by foot – ensuring a degree of safety for the island’s precious fauna and flora. Close up of the Wildflowers, at Kings Park and Botanical Garden. © Tourism Western Australia

Similarly, Kings Park and Botanic Garden is an attraction where you can relax, picnic and wander through native vegetation. The park overlooks Perth’s CBD and boasts grasstrees and kangaroo paws as well as towering eucalypts. A War Memorial with an eternal flame and an 18-metre granite pillar honours the Western Australians who paid the ultimate sacrifice. Perth is a city that did well out of the Western Australian gold rushes of the 1800s, when some of the largest gold nuggets ever found were unearthed. And The Perth Mint struck gold again when it was rated Tripadvisor’s 2021 Travellers’ Choice for its tour.

The staff are famous for being both informative and funny as they guide visitors through vaults, show them a live gold pour in the melting house, and introduce them to many other valuable artefacts, such as a hefty gold nugget and a one-tonne gold coin made from 99.99 per cent pure gold.

If you enjoyed this story on things to see around Perth, click here for more!

Rex airlines fly from Perth to a number of destinations, see below for details and click here to book your flights. 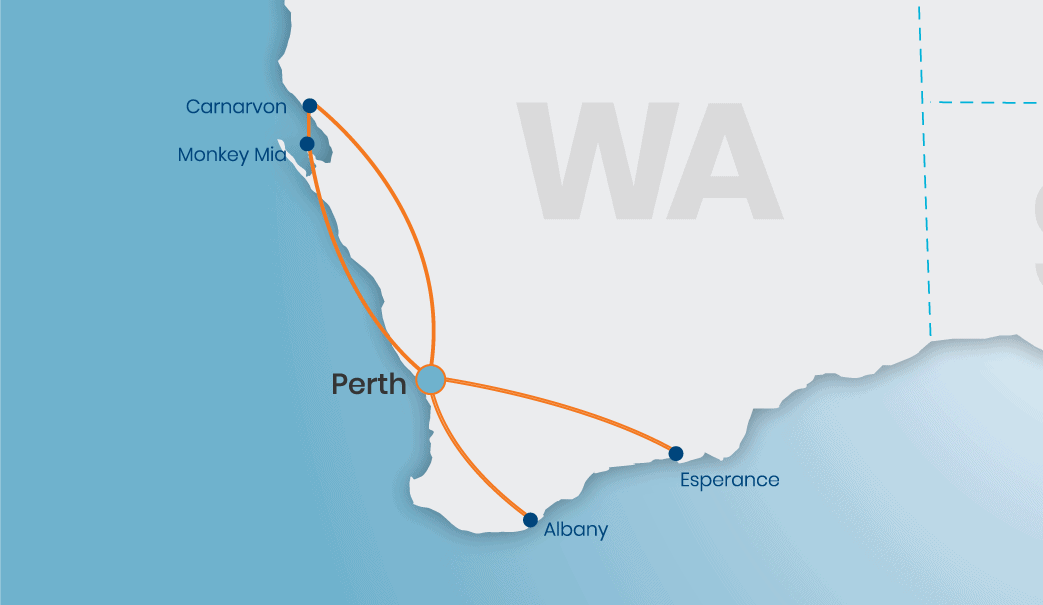 Travel to any of these port towns for more things to see around Perth in Western Australia with Rex airlines.