The top theatres in Melbourne to catch a live show Melbourne has a wealth of theatres, from grand heritage venues to lovely hidden gems. Whether you want to catch a blockbuster show, or see something a bit more unique Melbourne has the theatre for you. Check out our picks of the top theatres in Melbourne to catch a live show. Entrance to the Regent Theatre, one of the most opulent theatres in Melbourne. Image: Robert Blackburn.

Originally built as a cinema in 1929, the opulent Regent Theatre is a charming and magnificently restored theatre that has stood the test of time. Surviving everything from fire, flood and threats of demolition, the Regent reopened in all its former glory in 1996. It’s unique, luxe auditorium has drawn drama and music lovers from around the world, with seating for up to 2,145 patrons over two levels, complete with chandeliers, lavish seating and a beautiful proscenium. A grand old dame of Melbourne theatres, the Princess Theatre first opened in 1886. With its magnificent facade, domed roofs and marble foyer, it is instantly recognisable and a favourite of locals and visitors alike. This stunning Victorian-era entertainment palace has hosted international blockbusters such as Harry Potter and the Cursed Child. Head to the Princess for an absolutely electric night at the theatre. Arts Centre Melbourne hosts some of the most popular theatres in Melbourne. Image: Robert Blackburn.

Arts Centre Melbourne, on the banks of the Yarra River, has been one of Melbourne’s leading venues for world-class theatre, dance and music for more than 30 years. The Theatres Building hosts three separate theatres – the State Theatre, the Payhouse and the intimate Fairfax Studio. The grand and awe-inspiring State Theatre boasts 2,000 seats, one of the largest stages in the world (the floor space equivalent to eight suburban houses!), and is home to two resident companies: the Australian Ballet and Opera Australia. Take note of its magnificent and famous curtain, handpainted in Victorian wildflowers and a lyrebird’s tail. Also in the Arts Precinct, the city’s foremost concert venue, Hamer Hall underwent an extensive, multi-million dollar refurbishment in 2010, reopening in 2012. Now equipped with cutting-edge technology and decked out with lush interiors, this impressive concert stage has since showcased a broad range of local, national and international musical acts and concerts. Hamer Hall also hosts the Australian Chamber Orchestra and is home to the Melbourne Symphony Orchestra. With wonderful acoustics and powerful sound, it’s hard to beat. Her Majesty’s Theatre, one of the most beloved theatres in Melbourne. Image: Rebecca Newman Photography 2018.

Her Majesty’s Theatre, one of Melbourne’s most iconic venues for live performance, has been entertaining Australia since 1886. One of the cities most beloved theatres, Her Majesty’s has a gorgeous Art Deco glamour. Newly restored and with ongoing renovations and improvements – including new and more comfortable seats throughout the auditorium, a modern stage house, enlarged orchestra pit and upgraded backstage facilities –  Her Majesty’s Theatre continues to be a truly dynamic venue, hosting musicals, plays, opera, dance, comedy and more. It boasts an impressive seating capacity of 1,700 seats. 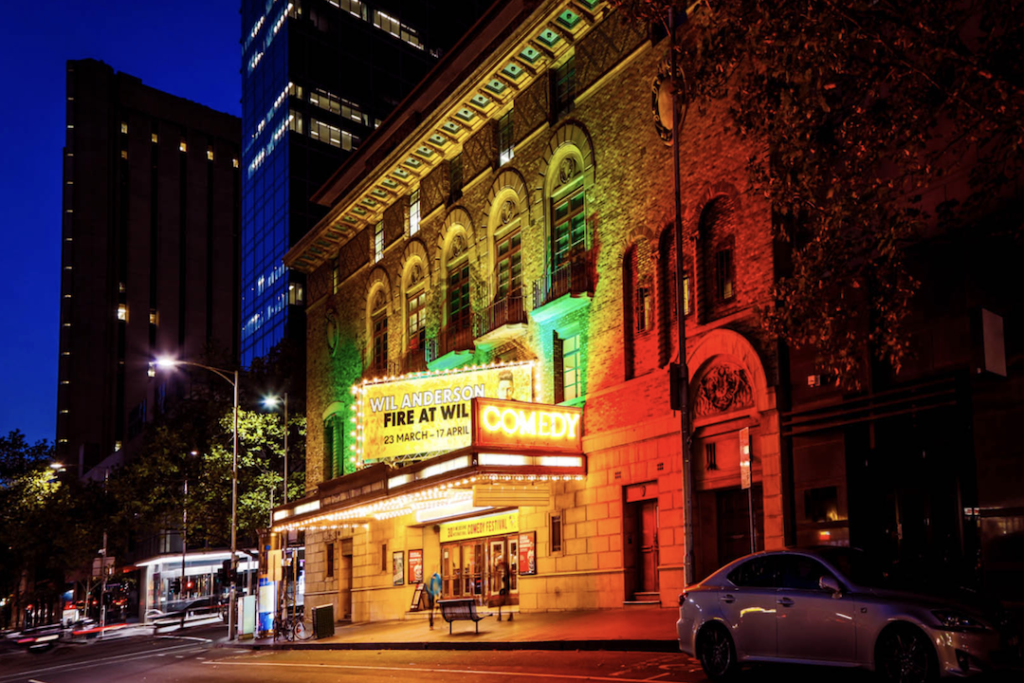 Visit the Comedy Theatre for a hilarious night out. Image: Visit Victoria.

While it might be a more intimate venue, the walls shake with laughter in the Comedy Theatre. Built in 1928, the Comedy Theatre on Exhibition Street has hosted local and touring theatre, comedy and musical shows for generations.The Spanish-inspired interior seats up to 1,000 guests across two tiers. Southbank Theatre is the home of the Melbourne Theatre Company. Image: Visit Victoria.

Southbank Theatre is the principal home of the Melbourne Theatre Company, and its award-winning architectural design makes a stunning backdrop for world-first stage adaptations, acclaimed dance performances, Pulitzer Prize-winning dramas and everything in between. Malthouse Theatre, one of the theatres in Melbourne where you can catch alternative and diverse shows. Image: What’s On Melbourne.

Malthouse is a unique artistic institution in Melbourne full of history, with thought-provoking live theatre experiences and strong community vibes. They showcase a diverse range of alternative and diverse acts in the 500-seat Merlyn Theatre. Check out an exciting and unique performance in this historic building (named for its origins as a historic beer-making malthouse built in 1892). fortyfivedownstairs is one of the city’s most renowned and multifaceted creative hubs: a not-for-profit theatre and gallery showcasing independent visual art, theatre and music. Here, you can catch independent, experimental and thought-provoking art – and the seating is rarely organised the same way twice, so you’re always in for a surprise! The Athenaeum is one of the oldest public institutions in Victoria, founded in 1839. Today, it is used for a range of theatre, comedy and music performances, including as the main venue for the Melbourne International Comedy Festival and Melbourne Opera. Take a seat for live theatre and music at the Athenaeum Theatre, or climb the grand staircase to the Last Laugh for stand-up comedy on weekends.

Hey culture vultures – looking for more to do in Melbourne? Check out the city’s best bookshops or 10 romantic date ideas for a weekend on the town.