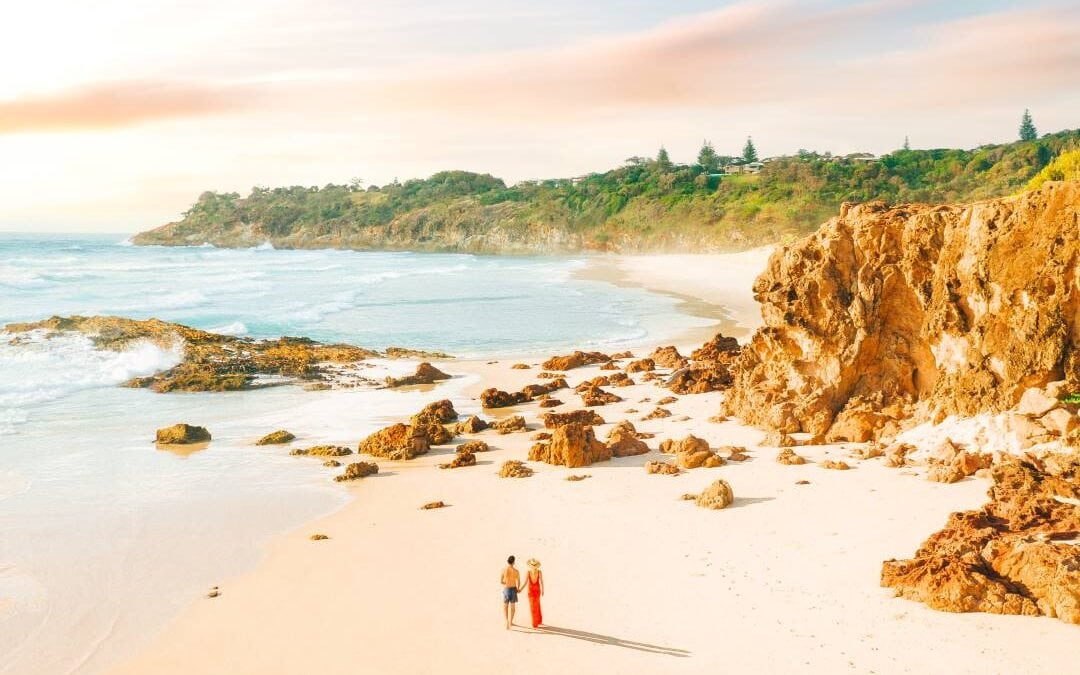 Fancy an island getaway without the five-star frou frou, with as much adventure on the sand as in the water? North Stradbroke Island fits the bill.

It sounds as if it was named by a Wiggle, but don’t be fooled; the Big Red Cat to North Stradbroke Island is a serious ferry. It looks like a huge white, red and black Transformer with capacity for up to 300 people and 50 cars. The impressive vessel makes the 20-kilomtre journey from the Brisbane suburb of Cleveland to the main port on ‘Straddie’ in just 45 minutes.

This laid-back Queensland island is a popular spot for 4WD, diving, fishing and surfing. So, the Big Red Cat is almost always jam-packed. Not the type who wants to throw yourself into a new adventure every single day? Straddie is still an ideal island for lying about, cruising around and winding down with BBQs on the beach. Exploring Straddie with a local

Straddie Kingfisher Tours guide ‘Barefoot’ Dave is about as local as you get. Dave owns just one pair of shoes; a concession to the Queensland Fire and Rescue Service, of which Dave is a member. It insists he has a pair of boots to wear if they need him.

Dave’s father and grandfather grew up on Stradbroke Island, and he’s lived here all his life. Why would you leave paradise? He’s the perfect bloke to give you a tour of the island. He’ll show you the best surf breaks and hottest spots for fishing, diving and snorkelling. Not to mention, his favourite 4WD tracks and spots to set up your picnic table for rolling ocean views. 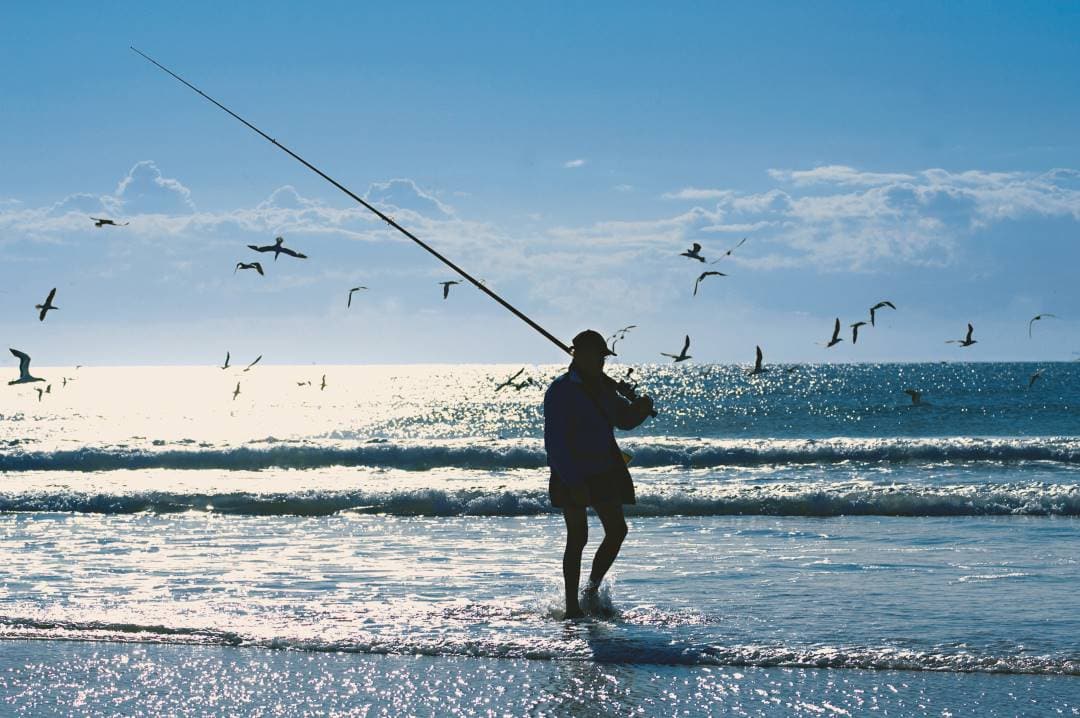 The three townships of Straddie – Point Lookout, Dunwich and Amity Point – are linked by bitumen roads, but it’s much more fun driving a 4×4 along the beach. First, though, you’ll need to pick up a beach driving permit from the Big Red Cat or from Straddie Camping. They cost around $40. It’s a complete buzz cruising along the sand at speed, dogs hanging out the windows or balancing on the bouncing trays of utes. Everyone passing gives you a friendly nod or wave. On most of his tours, Barefoot Dave sets up his famous barbie on the beach. He chars a few snags while guests feast on colossal portions of freshly made coleslaw and cups of orange cordial. Million-dollar views, lashings of tomato sauce and the cool shade of a gum tree are the final ingredients for concocting memories to last a lifetime.

You might think Dave’s days couldn’t be more perfect. You’d be wrong. The icing on the cake of this tour guide’s dreams is one that many of his Straddie mates share – and it’s made of sperm-whale puke. “I want to find a great big chunk of whale vomit,” Dave grins. No joke. A waxy, snot-green ball of ambergris, found in Moby Dick’s digestive tract, is used in top-shelf perfumes. It’s so rare it sells for around $20 a gram. In 2008, a 7.5-kilogram lump valued at more than $150,000 was found in Portland, Victoria; the largest piece ever found weighed 455kg.

“Oh yeah, I’m always on the lookout,” says Dave. “And being here, where things wash up all the time, I’m in a good spot to find a good one.”

Things to do on Stradbroke Island

If you’d rather be in or on the water than on solid ground, Straddie has everything you could wish for. The best part? They don’t come with the chunky price tag normally associated with island getaway activities.

During the cooler months between June and November, whale watching season sets in. The island is positioned perfectly along the migration path of countless ocean giants. People flock to North Gorge headland at Point Lookout to take it all in. It’s considered to be the best land-based viewing point of an annual migration of humpback whales on the entire planet. It’s almost guaranteed that you’ll see a pod – or four of them – having a ball, often showing off for rapt onlookers as they make their way to the calving grounds around the Whitsundays and Hervey Bay.

The range of marine life here is enough to keep any diver or snorkeller’s head on a swivel. Straddie’s waters are home to bottlenose and Indo-Pacific humpback dolphins, with common spinner dolphins also paying regular visits. Up to 1,000 bottlenose dolphins are permanent residents, meaning that North Stradbroke Island has the largest population for such a small area in the world. Green and Loggerhead turtles also pop up, some travelling from as far away as Papua New Guinea and New Caledonia to nest. Manta Ray Bommie, just off Point Lookout, is one of the best places in southern Queensland to swim with the oceanic equivalent of enormous rubbery dinner plates. These harmless creatures have a wingspan of up to seven metres. They often swim in groups of three to four over the summer months, and seem happy to get up close and personal with divers as they glide around with acrobatic grace.

If you’re lucky, you might also catch sight of a dugong. Scientists believe that the dugong population around Moreton Bay Island – Straddie’s neighbour – could number up to 700. An elusive creature that inhabits shallow, tropical waters, dugongs can weigh more than 400 kilograms. They’re on the World Conservation Union’s list of ‘vulnerable to extinction’ creatures. So, it’s a rare thrill if you come across one. Pack an underwater camera in case, for bragging rights when you get home. Not that you’ll miss out on those, even if you somehow leave the lens cap on. At any time of year, Straddie is an enviable destination. Who wouldn’t want to hang out on an island with nothing more important to do than get into the sand and surf, sink a few cold ones around the barbie or walk along the beach at sunset, scanning the tide line for disgorged chunks of whale sick?

Often, it’s the simple things in life that are the best.

If you’re wanting a laid-back, non-hotel vibe, Discover Stradbroke Real Estate should be the first place you look. They look after a wide selection of super-stylish and affordable houses and units for couples, families or large groups. Most are even pet-friendly so you can bring the whole family, four-legged members included.

Looking for more island adventures? This one will blow your mind (and probably your budget).