Meet some of the colourful characters that make Queensland’s Mount Isa Rodeo such an entertaining and thrilling spectacle.

Cliff ‘Hollywood’ Harris feels at home under the spotlight: he has a flair for showmanship and delights in making people laugh. A rodeo clown for more than 30 years, Cliff is still as passionate and excited about clowning as the day he first encountered it — a day that stands out distinctly in his mind.

“When I was four years old, my dad took me to the Heart O’ Texas Fair & Rodeo,” he recalls. “He was in the cattle business and he managed a feedlot, and the guys that worked for him were clowns and bull riders. So we went to the rodeo to watch them clown, and then when it was over and everyone was exiting, Dan — one of Dad’s workers — got on his bull. But he still had his clown face on, and I remember it clear as day. He had one of his hands in the air, and I looked at my dad and said, ‘Dad, is Dan waving at me?’ and he said, ‘I think he is, kid.’ And I’ve loved the rodeo ever since.” 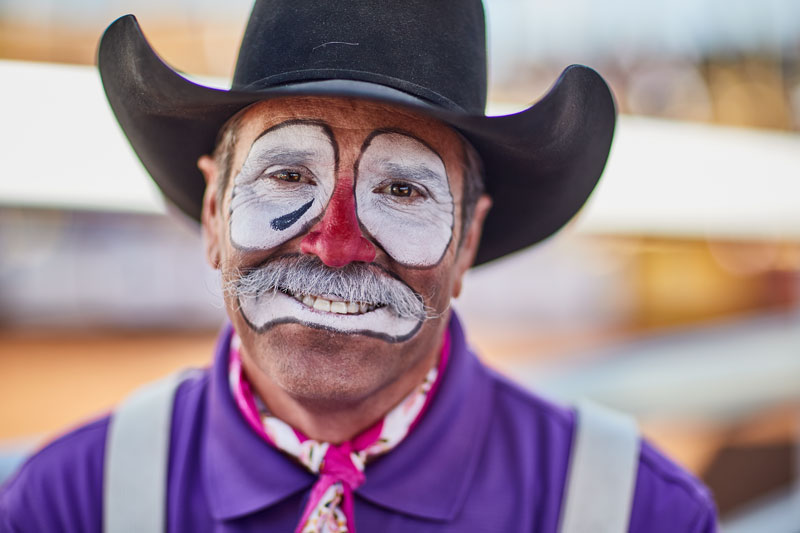 Even through his thick American accent, you can hear the smile crinkling the edges of Cliff’s mouth as he tells this story. It’s rare that any of us pursue our childhood pipe-dreams, but Cliff is one of the few who has. “I am very, very, blessed,” he acknowledges. “I will never be rich, but I’m wealthy in many other ways.”

One of the opportunities Cliff’s job affords him is the chance to travel, and in 2017 he made his first appearance at Queensland’s Mount Isa Mines Rotary Rodeo. “It was a real lot of fun,” he says, reflecting on his short stint. “And I tell you, the people were so, so nice.” It goes without saying that the rodeo-goers loved Cliff, too, as he entertained them and made them laugh throughout the weekend. I looked at my Dad and said, ‘Dad, is Dan waving at me?’ and he said, ‘I think he is, kid.’ And I’ve loved the rodeo ever since,” said Cliff. Photography by Ant Ong

However, Cliff wasn’t seen performing any of the athlete protection duties that used to fall under his jurisdiction as a rodeo clown when he first began in the industry. “I do miss doing that,” he says. “I miss that sensation of being able to slide in when you want and just manipulate the bull.” He pauses briefly before adding: “I don’t miss getting run over, though.” In 2009, Cliff suffered a career-worst injury, when a bull hooked onto his clown pants and thrashed around while he hung upside down for 50 seconds. “It snapped my leg and dislocated both my shoulders,” he says. “It wasn’t pretty, that’s for sure.” Asked how he found the courage to go back to work, he says: “Getting back in the arena was really no big deal, but coming back from the injury was hard. It took a good two and a half years and two surgeries — I had to have my ankle fused, so I don’t have use of the joint in my left ankle.” I can’t help but think the use of his left ankle might be helpful in the event that he ever has to run from a bull. Confirming my suspicions, he says: “It’s pretty tough to run. In my mind, I’m still really fast. But when I try to run I’m not fast at all anymore.”

Despite the risks that come with his chosen career, Cliff wouldn’t change a thing. And his proclivity for clowning clearly runs in the family; his son Brinson James is already being heralded as one of America’s most promising rodeo clowns. Now in his 20s, Brinson made his first rodeo appearance at the tender age of two, and has had the crowds in the palm of his hand ever since. 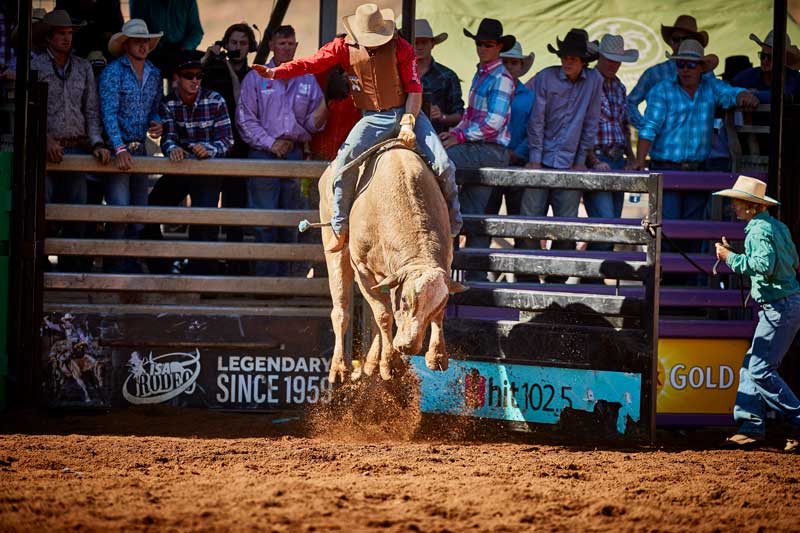 Working as a father-son duo at a rodeo in Quebec, Canada, Cliff had a bit of a revelation: “We were in the arena together — I have the old-school clown look and he has the new-age clown look — and I realised I can’t even keep up with him anymore,” he beams. “I actually had to get out of his way and say, ‘This is your crowd, buddy, you take ’em and run.’ I’m so proud of him.” The genuine delight in his voice is heartwarming, but ever the funny man, Cliff quickly adds: “He has more energy than me, but he’s not quite as funny as I am.”

Cliff once again entertained the boisterous crowds at the 60th anniversary of the Mount Isa Rodeo in 2018. He said he loved taking in the sights and learning more about the Australian Outback and the people who call it home.

Mount Isa Rodeo will be held in Queensland again this year, from 11-14 August.

Rex Airlines flies to Mount Isa directly from Cairns, and also on the N2 route. Click here to book your next flight.