A guide to your next New South Wales holiday Excellent food and wine, pristine national and marine parks, buzzing city life and relaxing rural escapes: I dare say these destinations have it all for your New South Wales holiday.

Australia’s most populous state has plenty to keep locals and visitors not only entertained, but enthralled.

These days travellers are seeking a New South Wales holiday that is more than passive. They want to get under the skin of each destination they visit and discover first hand what makes it so special. New South Wales has definitely answered that call. There are dozens of hands-on, immersive experiences from farm tours to indulgent spa escapes; art workshops at some of the states best galleries to sleepovers at Australia’s iconic Taronga Zoo; and over-the-top events like the Elvis Festival in Parkes and the scrumptious F.O.O.D. Week in Orange. Whatever your travel style, you’ll find something to love in every corner of New South Wales. Places to visit in Sydney

The state’s capital city is also the economic centre of the country. It’s known for ridiculously high real estate prices and, well, ridiculously high prices of pretty much everything. But the five million people who call it home clearly believe it’s worth the expense. While the glossy skyscrapers that shoot upward from the CBD may be intimidating (or inspiring depending on who you ask), Sydney is full of rich culture, history and charm. Cobblestoned laneways and backstreets swirl through the inner city suburbs. This is where Sydney’s intimate art scene thrives in unpretentious art galleries and secret rooftop music venues. For a night out, Surrey Hills, Paddington and Darlinghurst serve up almost any kind of cuisine you could imagine. There’s always a speakeasy-style bar or cosy pub open for kick ons.

If you’re exploring the city with kids, you’ll have no trouble finding an activity to suit all ages and interests. Sydney SEA LIFE Aquarium tops the list with so many interactive workshops and learning opportunities for the whole family. Next, the Australian National Maritime Museum deserves a mention. Kids can enjoy a collection of real-life tall ships, warships and submarines to climb aboard. And when it comes to eating out with the family, many of Sydney’s restaurants and pubs offer kids’ menus. There’s also dedicated play areas and activity packs to keep kids entertained. In recent years, Sydney has continued to spread out in all directions. To the north, Sydney’s Northern Beaches region is easily accessible by ferry from Circular Quay. It’s bursting at the seams with trendy cafes, bars and restaurants. It also has boutique shopping outlets and some of the most gorgeous beaches you’ll find on the east coast.

To the west, new attractions such as the Featherdale Wildlife Park, Treetops and Penrith’s indoor skydiving venue, iFLY, have put Sydney’s western suburbs on the radar of visitors to the capital. For less adrenaline and more relaxing, the Australian Botanic Garden at Mount Annan is the perfect spot for a picnic among the Wollemi pines. Otherwise, a stroll or cycle through Bicentennial Park will have you making a mental note to discover Sydney again soon. With so much rich and fertile farmland, a New South Wales holiday is the best time to experience the agricultural offerings that put the state at the front of the pack when it comes to food. The shining star of coastal dining and cafe culture is Byron Bay. It’s renowned for its high-quality, organic, locally-sourced everything. For those unfamiliar with the hippie-turned-hipster surf town, Byron Bay generally elicits one of two reactions; heart eyes or an eye roll. (The latter is usually only from people who loved it before it became popular and are just upset that they now have to wait for a table or, god forbid, book in advance!) 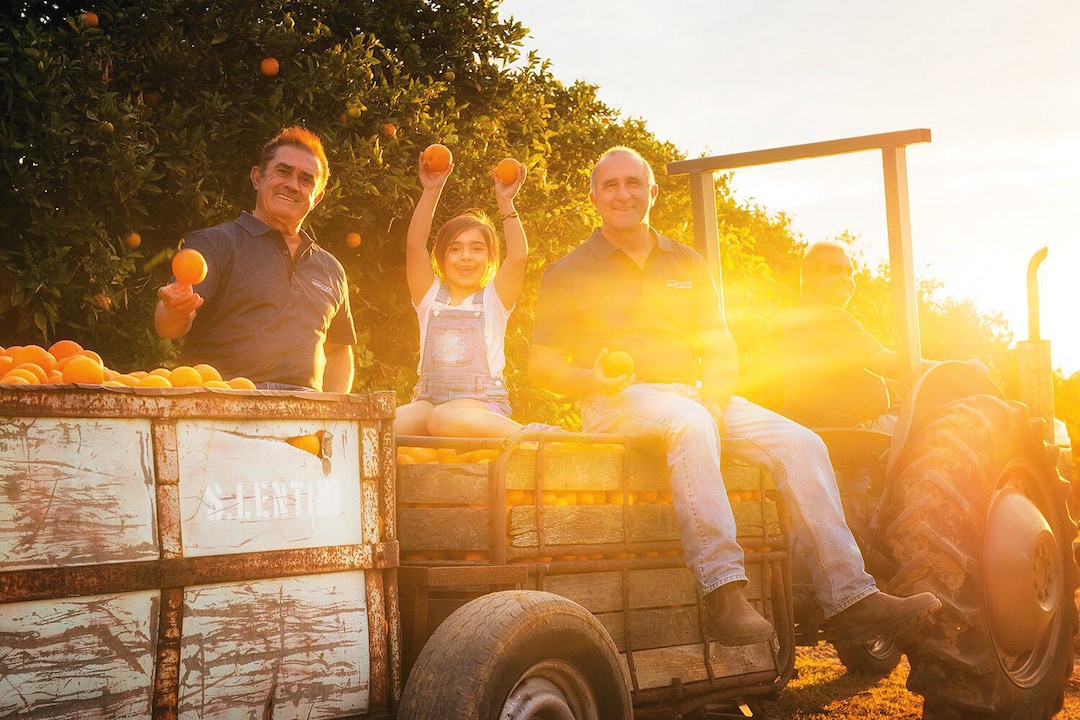 Nipping at Byron’s heels around eight hours south, the Central Coast has the same coastal setting, abundance of cafes and fine dining institutions. Here, you’re equally likely to see sandy bare feet below the table as you are a fresh pair of Moschinos.

Further inland, regions such as Griffith come raw, unfiltered and totally authentic. Family-run wineries and farm-to-plate eateries give some of the city’s finest restaurants a run for their money.

While it may be difficult to compete with names like the Barossa or McLaren Vale, New South Wales does boast a few stellar wine regions. This includes the Hunter Valley, about two hours north of Sydney. The best way to soak up the sweeping vineyards is by hot air balloon. This is closely followed by tastings at award-winning cellar doors such as Keith Tulloch’s Field of Mars and Peter Drayton Wines, and a night at the five-star boutique retreat, Spicers Vineyards Estate. Where to go in rural and outback New South Wales

If the aim of exploration on your New South Wales holiday is to get away from it all, there are plenty of places off the beaten path that will help you achieve peak relaxation. Head out to the Great Western Plains in Central New South Wales. Places like Dubbo and Coonabarabran offer reprieve from the fast-paced towns closer to the coast. They offer some of the most spectacular night skies you’ll ever witness. To get an even clearer view of the stars, head to nearby Warrumbungle National Park, home to Australia’s only Dark Sky Park.

The only other town that comes close when it comes to stargazing is way up north in Lightning Ridge. It’s an old opal mining outpost straddling the state border. The traditional land owners, the Gamilaraay people, tell stories of rare stones made from a huge wheel of fire. It fell to earth and scattered the land with dazzling opals. Unfortunately, most of the spoils were cleaned out in the early 1900s. This was when the opal rush spread to White Cliffs and Broken Hill. However, Lightning Ridge has retained gems of a different kind. Some of these gems are gothic-style Amigo’s Castle and the two million-year-old bore baths. New South Wales is currently home to 225 national parks scattered across the state. Some encompass vast mountain ranges and thick bushland. Others cover arid expanses that contain proof of human habitation dating back more than 50,000 years.

Blue Mountains National Park is undoubtedly the most popular for Sydney-siders looking for a weekend escape. Huge rock formations steeped in folklore, extensive networks of walking trails through untouched bushland and cosy accommodation make it a great spot for a family trip. On the South Coast, outdoor activities abound with places like Batemans Bay, Eurobodalla and Narooma. They offer a wide range of kayaking and cycling opportunities. Mimosa Rocks National Park further south towards Tathra and Bermagui is one of the most spectacular spots to explore. Not to mention the protected marine park that surrounds Montague Island, teeming with sea life such as the hundred-strong colony of playful fur seals.

In the northern coastal region of New South Wales, lush greenery that stretches beyond the horizon can be found in places such as Tweed Valley, often by-passed by road trippers heading north to the Sunshine state (link Queensland corner stone article here). Nature lovers in the know, however, flock here to explore Mount Warning for one of the best places to adventure. It’s the largest erosion caldera in the Southern Hemisphere and has uber-green surroundings. While its northern neighbour is the self-proclaimed home of Australia’s best beaches, New South Wales has some strong contenders that just might knock Queensland’s coastal hideouts off their block. When thinking about where to go on a New South Wales holiday, there are many locations to choose from.

In the Northern Rivers region just south of the Queensland border, Belongil Beach is often overlooked in favour of Byron Bay’s Main Beach, but it’s a quieter alternative with the same rolling waves and gorgeous views. It’s also dog friendly. Down on the South Coast, crystal clear waters lap the shores of Hyams Beach in Jervis Bay. Surrounded by national park, it’s a great spot for fishing, swimming, snorkelling and diving with sand so fine it squeaks underfoot.

Maitland Bay is only accessible by foot along the stunning Bouddi National Park coastal track. It’s a secluded beach with plenty of room for social distancing (crowds are virtually non-existent). There’s also a collection of rock pools and a shipwreck just off shore.

You’ll find more of our favourite New South Wales Beaches in a recent round up we wrote here. As a kid growing up in Australia, it’s almost a right of passage to take the iconic east coast road trip from Sydney to Brisbane (or the Goldie) at least once in your life. The entire way along, laid-back surf towns, quirky road side attractions and breathtaking beaches line the coast. The wineries in the Hunter valley (sample responsibly), the Big Banana in Coffs Harbour and Byron Bay Lighthouse are some of the best pit stops to make along the way.

Another popular route links Sydney’s southern coastal suburbs with a string of spectacular seaside towns. The hinterland meets the coast all the way to Eden near the Victorian border. Pass through Kiama to see the mighty blowhole. Then continue on to Hyam’s Beach near Huskisson, famous for its pure white sand. Continue onward to Bermagui and Tathtra, filling up on some of the best oysters in the country. From here, the Sapphire Coast opens up with spectacular whale watching spots in Merimbula and finally to the gorgeous fishing village of Eden. With so many quirky rural hamlets and coastal towns in the state, we’re always discovering new places to explore. From uniquely Australian experiences to top hotels and restaurants, we love sharing our finds with you. We hope they help to inspire your next NSW adventure.

How to get to your NSW destination

Rex Airlines flies into 17 different regional cities throughout New South Wales from both Sydney and Melbourne. See the map below for details on how to travel to your destination in NSW and book your flight here. 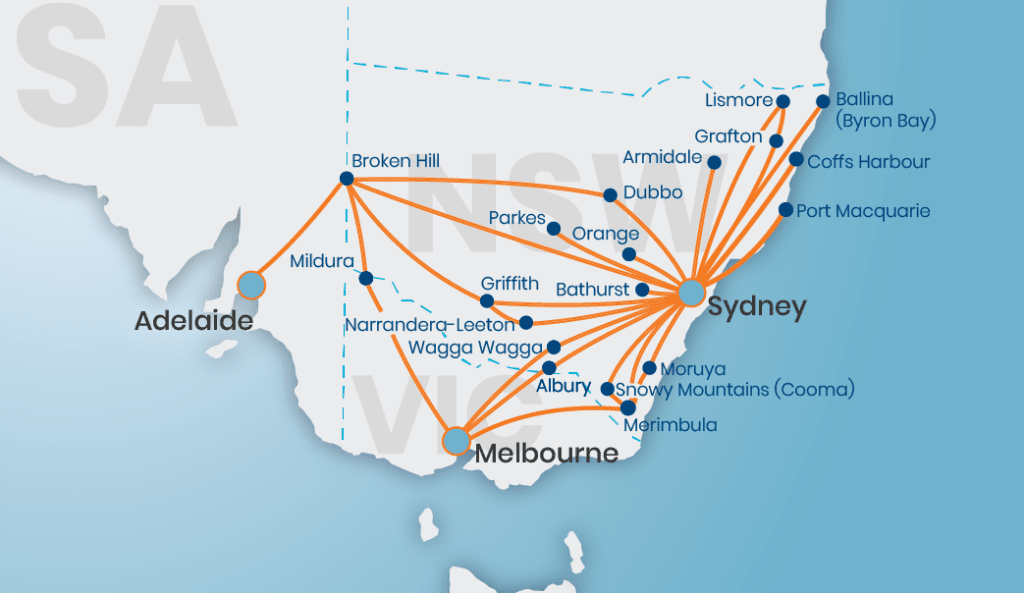