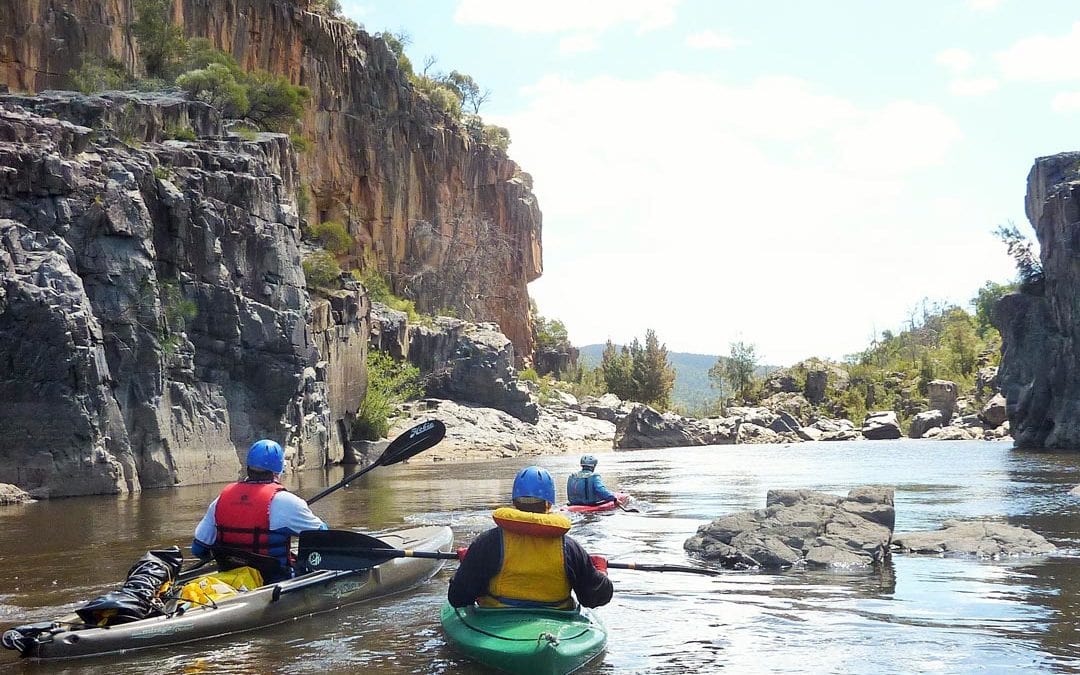 With nature parks comprising more than half of the ACT, Canberra deserves its reputation as Australia’s bush capital.

In summer, grab an inflatable mattress and float down one of the mountain streams (try the Gudgenby River) flanked by magnificent meadows of wildflowers, while in winter slip on some snow shoes and explore the great white wilderness (ideal for following animal tracks). Come autumn and spring Namadgi is a bushwalkers’ paradise, with 160km of marked tracks. Treks range from two and a half hours (6km return) to the remarkable Yankee Hat Aboriginal rock art site, to overnight hikes along the rocky spine of the Brindabella Range. In fact, it’s in rock overhangs around hulking peaks such as Mount Gingera (1857m) where during spring bogong moths arrive en masse for their annual aestivation (a kind of summer hibernation). Truly a sight to behold.

Namadgi is also home to a rare forest of exotic trees. Planted early last century as an experiment to determine which species grew best under Australian conditions, they include the aptly named big cone pine. Don’t stand underneath them without a helmet! If you want to get up close to some native critters, beat a path to this knock-out nature park, wedged up against the mountains in the city’s south. Just past the entrance gate (small entry fee) you can tick off “Australia’s coat of arms” with kangaroos and emus roaming free, but you’ll have to head deeper into the park to spot more elusive creatures, including the mysterious platypus.

With 20-odd designated hiking tracks of various grades and lengths, Tidbinbilla is also a popular day walk destination. A top choice for families is the Birrigai Time Trail (3km return) which doesn’t only lead you to a hidden cave used by Indigenous people dating back over 20,000 years, but also a number of naturally occurring crawl-throughs – perfect for that impromptu game of hide and seek.

For an extra special treat book a pop-up family wilderness camp, so you can bunk down in the park overnight. Fall asleep under a blanket of stars and unzip your tent in the morning and enjoy the tranquillity before the day-trippers arrive. Divine! Unlike most other Australian cities where hilltops were among the first to be developed, fortuitously Canberra’s suburban vantage spots were left untouched. Today they are a smorgasbord of small nature parks, allowing animals to move throughout the city.

There are actually 33 of these boutique nature parks in total, most tailor-made for that hour or two stroll to “get back to nature”. Due to their proximity to the suburbs, you can finish your exploration with a coffee or ice cream at a nearby café. Phew, just what the doctor ordered!

Wrapped around some of these nature parks is the much-loved Murrumbidgee River Corridor, a 66km strip of riverside greenspace that follows Australia’s second longest river on its entire journey through the ACT.

If you strap on your hiking boots you can walk alongside the ’bidgee (as locals call it) most of the way – or if you’re really adventurous ride the rapids of Red Rocks Gorge in a kayak. Located on the fringe of the city’s northern suburbs, Canberra’s newest nature park (free entry) is best explored after the sun sets.

It’s well-known that many of Australia’s native animals are nocturnal, and a special predator-proof fence constructed in this woodland in 2010 protects vulnerable creatures from threats such as foxes and feral cats.

Under the cloak of darkness you can spotlight sugar gliders, powerful owls and who knows, you may even glimpse an Eastern bettong — after becoming extinct on mainland Australia around 100 years ago they were successfully re-introduced to the fenced sanctuary in 2012.

Due to its proximity to Canberra’s expanding suburbs, the rangers at Mulligans offer many engaging experiences (charges apply) to visitors. These include Hollow Homes, an easy stroll during which your expert guide uses a number of tiny cameras to observe animals hiding inside trees. There’s also offer an introductory birdwatching tour that comes complete with the following qualification: “this tour may invoke a crippling addiction to spotting birds and spending time in nature.” Don’t say you weren’t warned.