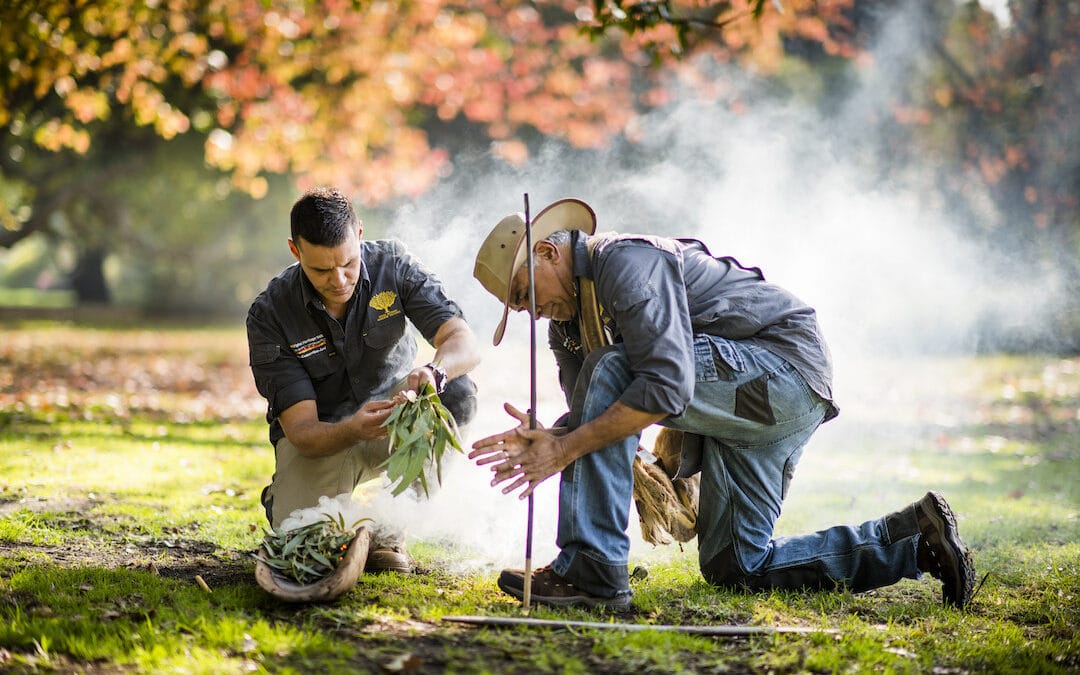 Predating human settlement of Europe and the Americas, Aboriginal people have held a strong connection to country here in Australia for more than 65,000 years. Their connections spread across the continent and have developed over the thousands of years with languages, art, dance and stories. Explore our top six Indigenous Melbourne experiences. In Melbourne, the Traditional Custodians of the land are the Bunurong Boon Wurrung and Wurundjeri Woi Wurrung peoples of the Eastern Kulin Nation. Spread throughout the city are a number of ways visitors can appreciate and learn about their culture while visiting Indigenous Melbourne. The Koorie Heritage Trust is proudly First Nations owned and managed as stated on their website. The cultural organisation is located in Federation Square and provides the opportunity for all to learn about the cultural heritage of Aboriginal Victoria. At the cultural organisation, they hold events and exhibitions that connect and re-connect people to traditional custodians of Melbourne and their histories, present stories and futures.

Located on the north bank of the Yarra River and around the corner from the Koorie Heritage Trust you will find Birrarung Marr, which translates to ‘river of mists’. Towards the marr or ‘side’ of the river, the Birrarung Wilam Aboriginal art installation is installed as a permanent feature of the park. The art acknowledges the five groups of the Kulin Nation through five shields that stand upright. Take a walk throughout the urban park and discover many other culturally significant locations to reflect as well as more installations. Head chef and owner Nornie Bero is from the Komet Tribe, hailing from the small island of Mer in the Torres Strait. The dishes are created with the influence of traditional culture and cuisine. Native spices and bush tucker are frequently listed on the menus of both restaurants in Melbourne; Big Esso in Federation Square and Tuck Shop in Yarraville. Kangaroo tail, pepperberry bourguignon and island friend scone as well as saltbush and pepperberry fried crocodile, oysters, cuttlefish and other assortments of flavourful dishes can be enjoyed at Big Esso. Big Esso translates to ‘the biggest thank you’ in an acknowledgement to the Elders of the community who have kept the Komet Tribe culture alive. Be captivated by a celebration of Aboriginal culture at the Bunjilaka Aboriginal Cultural Centre. Exhibitions are regularly held that highlight unique moments in history, celebrate culture and speak to issues that still impact First Peoples. Storytelling, performance and art can be observed throughout the hours of 9am-5pm. Alternatively, the museum captures some of its most captivating stories online on the website, or below.

Admission prices vary for the centre. Before you visit, plan ahead and look online to book your tickets. Street art is everywhere in Melbourne. The cobblestoned Hosier Lane has been a location where graffiti and urban culture is often depicted. Many social and political issues of contemporary society are expressed here through progressive street art.  It’s also really engaging for visitors and locals alike. One thing to remember is the art in Hosier Lane is ever-changing, meaning there is no guarantee how long certain artworks will last.

Melbourne graffiti artist Matt Adnate painted a large portrait of an Aboriginal boy in Hosier Lane. In an article to the ABC, Adnate said, “this portrait was designed to represent and empower indigenous culture.” If you want to appreciate the culture of First Peoples outdoors, the Aboriginal Heritage Walk as part of the National Sustainable Living Festival 2022 is the perfect activity. The walk begins with a traditional smoking ceremony, welcoming walkers to country. Explore the traditional utilisation of trees and plants by the Bunurong Boon Wurrung and Wurundjeri Woi Wurrung peoples who were the first custodians of the land. Walkers will gain a better understanding of the relationship between First Peoples and their environment. In order to participate, you must purchase tickets.

Across Australia, there are many activities and places you can explore to appreciate and celebrate the culture of First Peoples. If you would like to know more about other cities aside from Indigenous Melbourne, we have some suggestions below: