Melbourne has been the proud host of the Australian Open for 34 years. A popular tourist spot for tennis-fans across the country, why not join in on the excitement by exploring the greatest moments in Australian Open History?

1. NAVRATILOVA: OUT FROM THE IRON CURTAIN, OUT OF THE CLOSET, AND OUT OF THIS WORLD, 1981

Few sportspeople can hold a match to the magnificent Czech-born Martina Navratilova, and in 1981 she showed her courage wasn’t just displayed on-court. It was a big year for the legendary player, who’d both revealed her sexual orientation and become a US citizen, but rival Chris Evert remained world number one ahead of the final in Oz. Of the pair’s 14 Grand Slam final meet-ups, this was the best: a nail-biting, see-sawing, 6-7, 6-4, 7-5 win over a stacked women’s field. It was Navratilova’s first as an American and as an openly gay athlete.

“[The media] ended up getting out of me that I’d been a cleaner, so, therefore, I was a janitor,” said Mark Edmondson, still Australia’s last men’s winner of our domestic Open. “After I won, one writer gave me a mop and bucket and had me throw it away for a photo op. So I’ve been a janitor all my life.” In the 1976 Open the four semi-finalists were all Aussies – something we daren’t dream of now. The least fancied of them all, Edmondson, beat the legendary Ken Rosewall, and then none other than John Newcombe – and John Newcombe’s moustache – to win. He never made the finals of another Grand Slam. If hard competition makes good sportspeople great, then it’s no wonder Serena and Venus Williams made it to the top of world tennis. Even so, in 2003, younger sibling Serena was already showing the dominance that would edge her legend slightly ahead in any eventual reckoning. In a hard-fought 7-6(4), 3-6, 6-4 victory, the 21-year-old junior Williams prevailed in an epic encounter – becoming the fifth woman to hold all four majors at once. “I’m really, really, really happy,” she said, having vanquished her sister, “and I’d like to thank my mum and dad for always supporting me.”

In the days before tiebreakers, Rod Laver – whose name adorns the current arena – and rising star Tony Roche played a scarcely believable 42-game second set. So sweltering was their four-hour marathon, in then outrageous 39-degree heat, that Laver put cabbage in his hat to cool down (the 1960s were weird). Roche, hungry and aggressive at just 23, lost the first two sets, then came roaring back to square the ledger before the fifth. But Rocket Rod was then a wily 30-year-old; a long-time pro whose non-amateur status, accommodated by rule changes, had him eligible for his first Australian Open in seven years. He won the match, the Open, and – in the same year – his second single-year Grand Slam. Half a century later, Laver remains the last player to manage the feat.

“This was definitely one of the greatest matches of all time – easily one of the 10 best since the Open era of tennis started in 1968,” said Steve Flink, author of The Greatest Tennis Matches of All Time, speaking to World Tennis.

“Djokovic and Nadal both showed boundless energy and determination. They moved beyond themselves time and again, finding reserves of willpower they never knew existed. It was a match that will stand the test of time. It was riveting theatre…”

Then the world’s top two male players, the stage was set for an epic showdown in 2012 – but even so, nobody could have expected the third consecutive final between the Serbian prince and the Majorcan great to run almost an hour longer than any Grand Slam decider ever held. The match finished at 1.37am on Monday, Melbourne time. What’s more, with an eventual 5-7, 6-4, 6-2, 6-7, 7-5 scoreline, it seemed that almost every point was a seesawing nail-biter. The ninth game included a 32-shot rally. Breaking with convention, the knackered pair were given chairs to sit in at the presentation.

“This one was very special,” said Rafa – the loser on the night. “But I really understand that was a really special match, and probably a match that’s going to be in my mind not because I lost, no, because [of] the way that we played.”

“Both of us, physically, we took the last drop of energy that we had from our bodies,” Djokovic said. 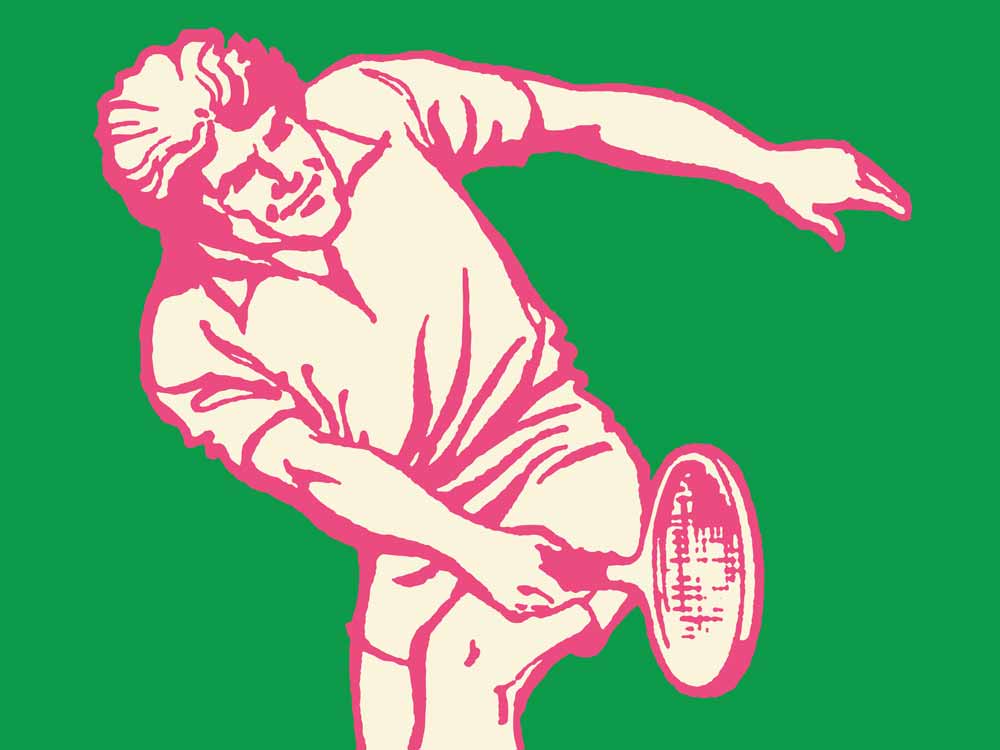 Marcos Baghdatis had four years earlier played one of the tournament’s truly epic matches, a five-set defeat to Lleyton “C’moon!” Hewitt that started at 11.47pm and finished at 4.33am. But it was the Cypriot’s 2012 meltdown that broke records of a different sort: for racquet demolition. The hirsute slugger was slugged with an $800 fine for destroying four expensive pieces of his own carbon-fibre hardware – effectively less than cost price – in a courtside tantrum while going down to Stan Wawrinka. Two of them never even made it out of their bubble wrap. “I think that’s one of the best [racquet tantrums] I’ve seen,” said Todd Woodbridge from the commentary booth.

On the fifth day of play in 2014, Melbourne nudged 44°C – with 6 per cent humidity. Daily temps had topped 41.5°C for the three previous days. A record nine players withdrew before Round 1; on day three, 970 fans were treated for heat exhaustion. Canadian player Frank Dancevic began to hallucinate mid-match, a ball-boy collapsed, and several players ruminated that someone might, y’know… die. Having previously resisted all pressure, organisers changed their Extreme Heat Policy for 2015. The fireproof pair of Stan Wawrinka and Li Na won the respective singles titles. 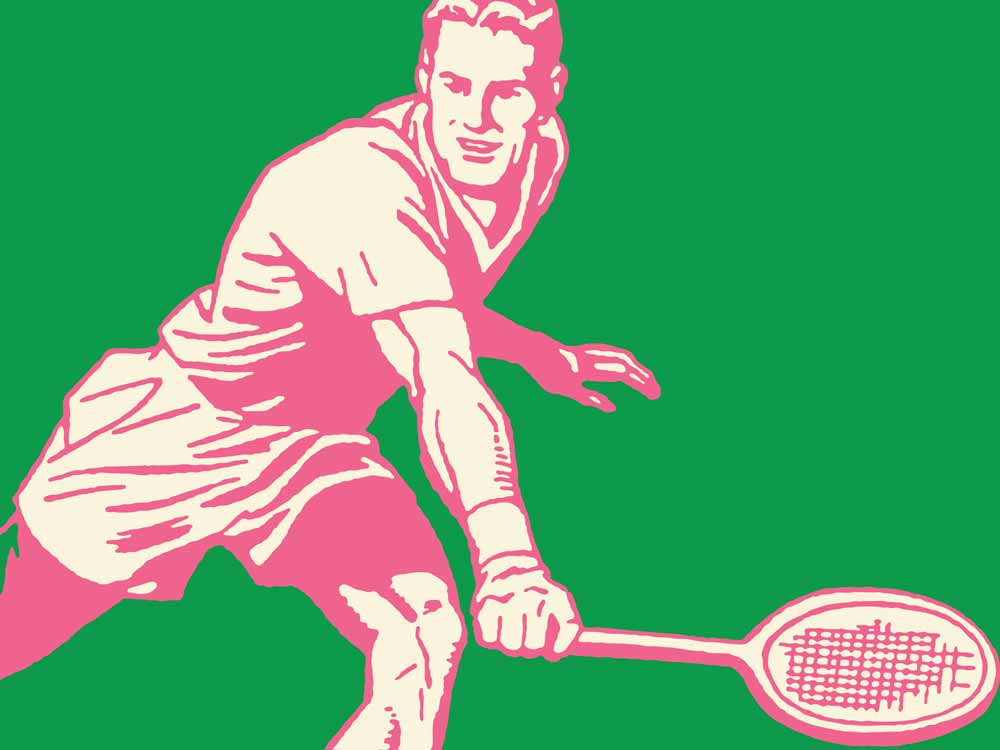 The genius of R-Fed is unquestioned. But in 2009 he was rolled in the final by his greatest rival, Rafael Nadal. Just a year after their all-time epic Wimbledon final – also won by the Spaniard – the Swiss went down in a gruelling five-set tennis war. He was uncommonly devastated. “God, it’s killing me,” he said, breaking down in his runners-up speech. Rafa, with characteristic class, rushed to embrace him, and sport, briefly, felt like it had nothing to do with money.

John McEnroe was the public temper tantrum OG, a sort of combined Picasso, Socrates and Charlemagne of shit-losing. The American tennis genius was so great at flying off the handle that he’d regularly end up in a parallel dimension, light years away, in a place where handles hadn’t even been invented. But the 1990 Australian Open was a ripper. First he copped a violation for staring down a lineswoman. Then he smashed a racket (second violation). Then he began swearing at the chair umpire (strike three). Then he realised that the old four-strike disqualification rule was newly a three-strike rule… and defaulted the match. It made the Mac the first player disqualified from a Grand Slam match since 1963. Of course, who could forget the most recent  Australian Open champion, Ash Barty? A three time grand slam singles champion, and the reigning champion at Wimbledon and the Australian Open, Barty has truly vanquished every foe in her path. After a thrilling 6-3 7-6 win over American Danielle Collins, she also went down in history as the first Australian woman to take the title in 44 years. The world No.1 joins Serena Williams as the only other active player to win major titles on three different surfaces. “This is just a dream come true for me,” said Barty at the end of the emotional match. It’s no wonder that she continues to inspire the next generation of tennis players.

Can’t get enough of these greatest moments in Australian Open History? Why not experience some for yourself by heading down to Melbourne? For more activities to do while you’re there, click here.