Whyalla is located on one of Australia’s most picturesque stretches of coastline, where the rich red colours of the Australian Outback meet the turquoise sea of the Spencer Gulf on South Australia’s Eyre Peninsula.

The town of Whyalla grew up around BHP’s iron ore jetty, and was declared a city in 1961, as BHP’s industrial activities grew with the building of shipyards and steelworks. The city still has a substantial industrial base, providing mining, engineering and steel manufacturing services.

While the town remains an important industrial hub on this remote patch of South Australian coastline, the region’s natural wonders are driving a burgeoning tourism industry. Today it’s the colours of the outback and that turquoise sea that attract growing numbers of visitors. Along the Whyalla coastline is a range of self-guided hiking trails of varying lengths with plenty of vantage points at which to watch those sunsets.

The self-guided 1.9-kilometre City Walk, which starts at the north-eastern end of the city, encompasses many of the city’s historical sites and also takes in Hummock Hill, a 10-minute climb for panoramic views of the city, Spencer Gulf and Flinders Ranges. Interpretive signs along the trail explain the history of the settlement, industrial history, natural and maritime heritage.

In the centre of town, the 2.1-kilometre Education and Cultural Trail takes in the main education and cultural precinct of the city including the campus of the University of SA, TAFE SA, Leisure Centre, Regional Development Australia and Middleback Art Centre. The first section runs through dunes, pebble beaches and bushland before joining up with the joint-use trail which follows the coastal emergency track, providing spectacular views of the Gulf and the distant Southern Flinders Ranges. Interpretive signs explain the Aboriginal history, early European exploration, flora and fauna, and marine life. In the winter months scuba divers and underwater photographers come to Whyalla in droves to witness Spencer Bay’s famous aggregation of giant cuttlefish, but in the summer months it’s a great destination for a seaside holiday.

Giant cuttlefish aggregate to mate in Spencer Bay in the hundreds of thousands, an incredible spectacle to watch and can be done on scuba or snorkel in the shallows, with much of the action taking place between three to seven metres depth. Safe swimming on the shallow foreshore at Whyalla Beach make it a good choice for young families, while the calm waters in the bay are ideal for kayaks and stand up paddle boards, and close encounters with marine life are part of the attraction. While kayaking you’re likely to encounter a large pod of dolphins which visits frequently, following the fishermen in hopes of a snack, and a short distance along the coast on the Santos jetty, a colony of seals has taken up residence.

If you don’t want to get your feet wet, the Whyalla Maritime Museum is well worth a visit. It’s home to the former HMAS Whyalla, the first ship built in the Whyalla Shipyards in 1941 and houses a great collection of maritime memorabilia, taking in Whyalla’s shipbuilding era, as well as an excellent Natural History gallery showcasing the Gulf’s diverse marine environment. Twenty kilometres from Whyalla, there’s a patch of coastline in Fitzgerald Bay with striking red shingle beach ridges, which is being considered for heritage listing. It’s one of only three places on the planet with similar shingle ridges, the other two being in Scotland and Egypt.

A geological phenomenon, these stranded shingle beach deposits cover a distance of some 50 kilometres from the head of Spencer Gulf south along its western shore to Stony Point, and are believed to date back to the Pleistocene period. Two minutes’ drive inland from the city foreshore, Whyalla Wetlands is another popular spot for nature lovers. The wetlands area, created in the city’s old aerodrome, covers an area of 24 hectares, with almost seven hectares of artificial lakes which attract more than 80 species of birds, and at nearby Hummock Hill in the Whyalla Conservation Park, you’ll likely spot red and grey kangaroos as well as more than 20 species of reptiles.

You can fly directly into Whyalla from Adelaide with Rex (Regional Express). Find the latest flight schedule and book your tickets here. 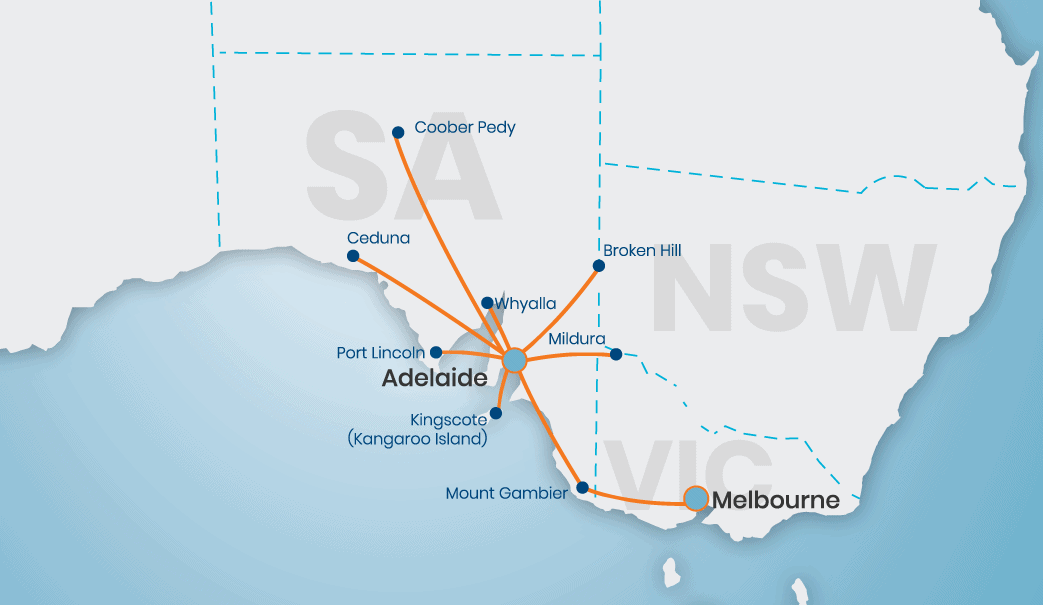