Whether its relaxing on white sandy beaches or sipping cocktails at sunset; seeking out dinosaur footprints or getting up close to snubfin dolphins, Broome, in northern Western Australia, has something for everyone.

Myles the hovercraft pilot, who offers tours of Broome’s Roebuck Bay in a banana-hued vehicle, walks over the rust-red rocks and stands in a dinosaur print. My two children, my husband and I, along with a group of other keen nature lovers, stare in awe at the enormity of the impression. Myles explains that we’re looking at a 120-million-year-old footprint left behind by a sauropod, a four-legged herbivorous dinosaur. We learn that it’s not just the sauropod that roamed this region. The only trace of stegosauruses in Australia are found near here. When confronted by the extraordinary footprints around Broome, University of Queensland Palaeontologist Dr Steve Salisbury declared the area ‘Australia’s own Jurassic Park’. Here, 2400 kilometres north of Perth, you feel like you’re wandering around in one giant open-air museum. My mind is already turning circles, and then we move on to discussing the myriad creatures that live in the milky turquoise waters of Roebuck Bay; an area eight times the size of Sydney Harbour. Here, you can spot saltwater crocs and dugongs chewing on seagrass. There are even cute snubfin dolphins, a species so rare that David Attenborough’s film crew flew in for a month to film its habitat and movements.

And just when you think you’ve seen all of this bay’s secrets, Myles moves the hovercraft and we spot the wrecks of the WWII flying boats. Now encrusted with barnacles, the 15 anchored flying boats were destroyed during an air raid in 1942, which killed more than 80 people. “It is a war grave,” Myles explains. So we take care and make sure we don’t walk on the partly submerged aircrafts.

After several more hours exploring the bay, we head home for a peaceful night’s sleep in our tropical-style lodgings at BroomeTown B&B. The breezy holiday home with an inviting pool is located only a 10-minute walk from Chinatown, Broome’s shopping hub, and next to the Broome Courthouse, where colourful markets are held each Saturday and Sunday. We’re up with the birds to take a walking tour with Bart Pigram of Narlijia Experiences. Bart, a Yawuru man, takes us on a two-hour adventure through the heart of Chinatown. It was established by Chinese merchants in the late 1800s. Along the way, he describes the landscape and the Yawuru people’s place within it. He weaves in stories about Sun Pictures (the oldest operating outdoor cinema in the world) and the opium dens, brothels and gambling houses that once existed in Broome. Like 90 per cent of Broome locals, Bart’s background is a melting pot of Indigenous, European and Asian heritage. Many people here are descendants of the Japanese, Chinese, Malaysians and Filipinos who came to seek their fortunes or work as pearl divers. Chinatown is a legacy of the industry’s boom days before the market collapsed, eventually replaced by the new trade in cultured pearls. After bidding Bart farewell, we drive 20 kilometres east of Broome to the Broome Bird Observatory. This observatory has the uncanny ability to turn the most disinterested of birdwatchers into a twitcher. Who could not be in awe of the estimated 150,000 birds who visit Roebuck Bay’s mangrove-dotted shoreline every year?

We may think we have travelled far to get to Broome but that’s nothing compared to the eastern curlew. This elegant brown shorebird has flown 17,500 kilometres to get to Broome from its breeding grounds near Vladivostok, in Russia close to China and North Korea. The observatory has rustic-style accommodation and week-long courses. We’d love to stay but with so much still to see in Broome, we jump in the car and journey back.

Cable Beach and Staircase to the Moon in Broome, WA

We head to Cable Beach, where there’s a dizzying array of activities on offer. Come sunset we find ourselves sipping cocktails at a beachside bar, while watching the locals drive their four-wheel-drives onto the 22-kilometre-long strip of white sand for a barbecue. 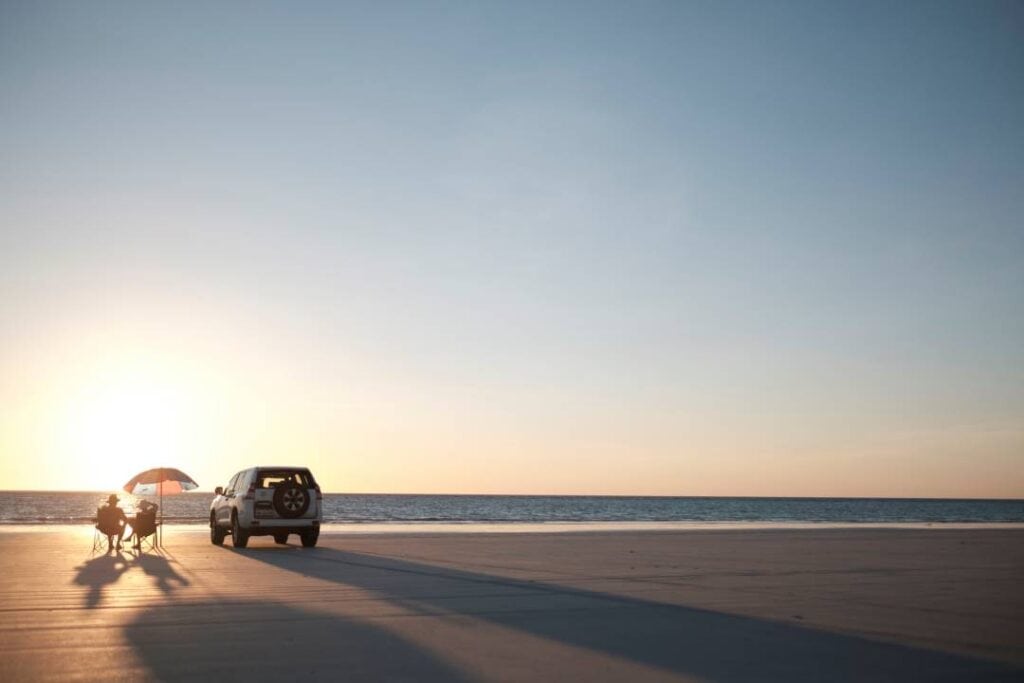 Later that night we watch one of the best free shows in town, known as Staircase to the Moon. This occurs on certain nights between March and October (check visitbroome.com.au for dates). The golden glow of the full moon on the tidal flats creates the illusion of an enormous staircase. The best place to witness this natural phenomenon is at Town Beach. There’s an open-air market with stalls, live music and food trucks that dish up authentic Asian street food.

Places to eat and drink in Broome, WA

Speaking of dinner, it’s tricky deciding where to dine. Recommendations include Zensai, a romantic Japanese restaurant located inside the Cable Beach Club Resort, The Aarli in Chinatown, and Bali Hai Resort at Cable Beach. We opt for a casual meal at the Mangrove Hotel with its spine-tingling view of Roebuck Bay. As the sun fades, my husband and I drink mango beers from the local Matso’s Brewery, while the kids play on the spinach-green lawn. Live tunes, played by two members of The Pigram Brothers band, get the crowd tapping their toes. Soon we are up dancing in the warm tropical air. With experiences like this, I can easily see why Broome is at the top of so many people’s wanderlust wish lists.