All roads lead to Birdsville: An Outback Queensland road trip Boulia is the ‘Land of the Min Min Light’. It is where mystery, history, science and dinosaurs meet.

Located in far North-Western Queensland, a mere stone throw from the Queensland/Northern Territory border, this town may only have a population of around 440 but it packs its weight in things to see and do.

The Min Min is a mysterious light that is said to dance just above the horizon and follow you. It continues to intrigue many since it was first recorded at the Min Min Hotel, now a ruins, in the 1890s, when it appeared over a grave at the rear of the hotel which burnt down in the 1990s.

At the Min Min Encounter Centre in the main street of Boulia, you’ll discover the legends and myths of these mysterious and mesmerising lights along with the stories of those that have seen them during the 45-minute self-guided tour.

Along the way, you meet characters like Gunna and Bluey. Join Trish McGreil and her husband Ian as they relax on the porch of their station homestead and hear their tales about the lights and many of the possible explanations as to what causes them. But remember this: you don’t go looking for the Min Min, the Min Min goes looking for you!

More than a hundred million years ago Boulia lay below a vast inland sea called the Eromanga Sea. This prime property was inhabited by marine reptiles such as the long-necked Plesiosaur, the Kronosaurus and the Lcthyosaur to name a few. At the Marine Reptile Fossil Display, you’ll see a wonderful collection of world-class fossils.

This Heritage listed cottage constructed in the 1880s of stone and compacted rubble houses an array of historical artefacts including machinery, photographs, communications, homewares and much more. Imagine what life was like before the invention of the modern cons of today.

An outback event filled with loads of fun for everyone with the final race – The Thirsty Camel Cup – being Australia’s longest and the richest camel race in Australia! There is live entertainment, camp oven cooking, food, fireworks, children’s amusements and a host of novelty races and events.

Stretching across 507,000 hectares this outback national park, 183 km southeast of Boulia is home to many rare and threatened species and abundant birdlife including the rainbird, blackfaced cuckoo, lorikeets, brolgas and plain turkey/bustards. Lake Constance and Hunters Gorge are important wetlands and supporting breeding populations of numerous resident and migratory birds.

Formerly a pastoral holding, the park features weathered sandstone ranges, Mitchell grass plains and the floodplains and tributaries of the Diamantina River to dune fields. Call into the unstaffed information centre in the old store building and learn from displays how the property once managed over 12.000 head of cattle requiring up to 20 stockmen.

Windmills have become iconic with Australia’s outback and Boulia has a grand dame standing right in the main street. For over a century, windmills have generated the means to bring the water of the Great Artesian Basin, the largest and deepest artesian basin in the world, above ground. Stretching over 1,700,000 square kilometres, the Great Artesian Basin provides the only reliable source of freshwater through much of arid inland Australia. Boulia’s windmill allows all visitors to town an opportunity to capture one of those iconic outback images! The Min Min is a mysterious light that dances on the horizon as pictured above. © Danielle Lancaster

7. The Black Stump and Corroboree Tree

If you’ve heard the saying ‘Beyond the Black Stump’ and ever wondered where it is look on the median strip between the Australian Hotel and the Waddi Tree store on Herbert Street, and you’ll find Boulia’s answer to the Black Stump.

The Corroboree Tree, behind the Boulia State School, is the last recognised Corroboree Tree of the Pitta Pitta tribe. The tree is a Waddi (Acacia Peuce), which can only be found in the Boulia/Diamantina Shires. They are one of Australia’s rarest plants, have spiky, needle-like leaves and can live for 200 years. With abnormally hardwood and they say they are impossible to burn. The Waddi tree aroused explorer William John Wills’ interest, with seeds from the tree found in his diary after his death. Tag TrulyAus in your adventures @trulyaus on Instagram and Facebook if you ever happen to travel Boulia. You can research more about outback Queensland with our other story on Bedourie.

Rex Airlines flies to Boulia on their Western 2 Route from Brisbane to Toowoomba (Wellcamp) to Charleville to Quilpie to Windorah to Birdsville to Bedourie to Boulia to Mount Isa and return.

See the map below for details on how to travel to Boulia and book your flight here. 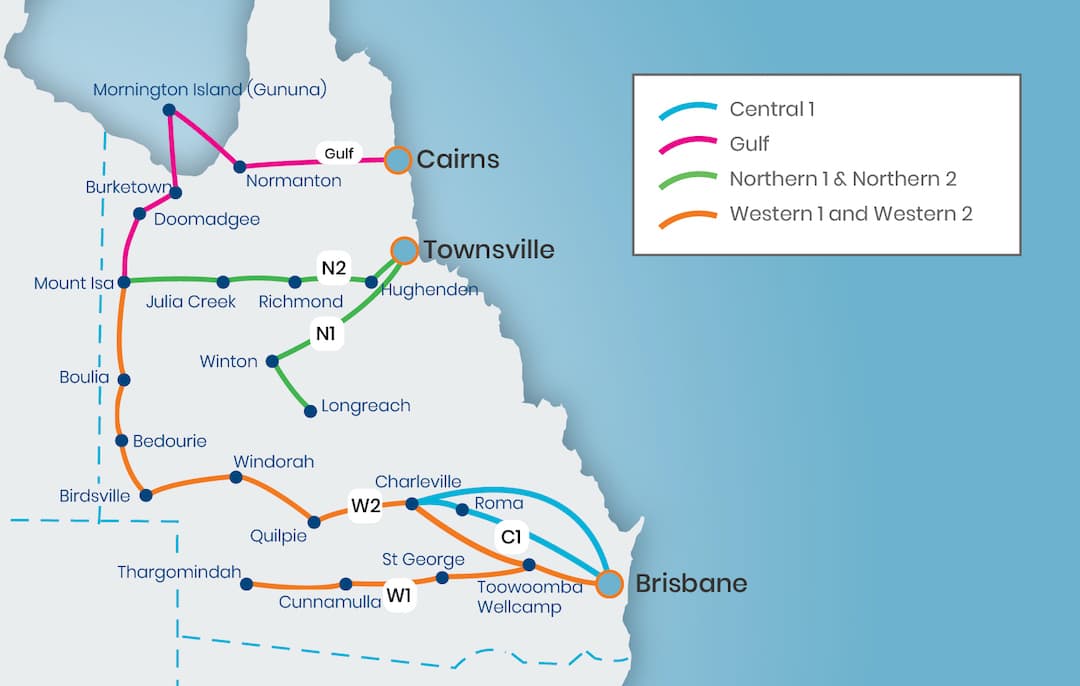 Western 2 flight path to Boulia is highlighted in Orange.