The first time I encountered one of Fintan Magee’s murals, I felt as though I’d been punched in the stomach. Walking down Alice Street in Sydney’s inner-west suburb of Newtown, I was stopped in my tracks by the sight of a young man in an ocean-blue shirt. Emblazoned on the dark-red brick wall in front of me, this man was utterly lifelike, from natural folds that had formed in his clothing to the flecks of light brown and blond in his otherwise auburn hair.

However, what really provoked my sense of wonder was his torso, or lack thereof. In its place was a large metal birdcage, empty except for one finch-like bird that had yet to fly the coop. I felt paralysed watching him, but ultimately I was the one who walked away, while he is still stuck in that moment, letting something beautiful and cherished fly away. This was my initiation into the whimsical, entrancing and often confronting world of Fintan Magee’s art.

Creative from a young age, Fintan credits his parents with giving him the support and encouragement to express himself artistically. He also acknowledges that thanks to his parents’ careers — his mother an architect, his father a sculptor — creativity runs in his bloodline. “My parents definitely laid the foundation,” he says. “My father was a teacher, so he was always able to help me out with technical advice, and they were both very supportive of my career and creative outlets. They always gave me the freedom to do what I wanted.”

“It was a classic case of art school ruined my graffiti.”  — Fintan Magee

However, as is the case for most people, finding his feet and the exact direction he wanted to head in as an artist took some time. When he was about 13, Fintan got into traditional forms of graffiti, but that proved to be a fraught component of his career that culminated in an arrest in 2006. Asked how the experience shaped him as an artist, Fintan says, “It just made me focus my energy away from graffiti for a short period while I sorted out my legal issues. I enrolled in university in 2007 and my work started to become more figurative as I got tired of the lettering format of graffiti. It was a classic case of art school ruined my graffiti.”

Since then street art has taken Fintan across the globe, from French Polynesia and Italy to Buenos Aires and New York. “I feel like I take something from everywhere I have visited,” he says. “There are a couple of different places that stand out — Russia, Ukraine and Jordan, for example. But for the most part, everywhere I visit has its own challenges and rewards.” 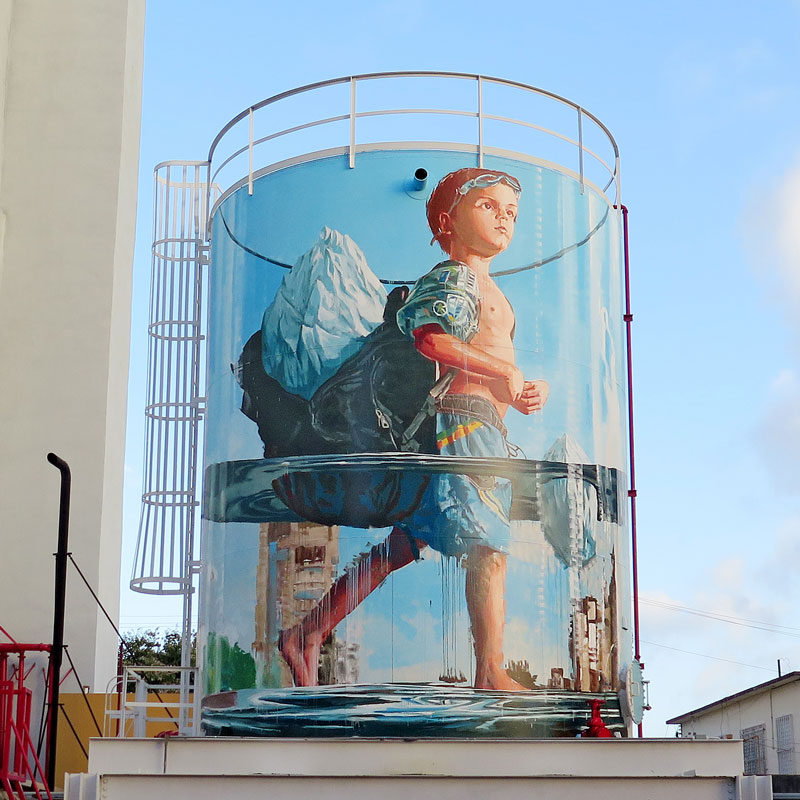 A common challenge for Fintan is the form his art takes; the creation of large-scale street art in often-isolated corners of a city can be problematic. “The logistics of producing large works can be highly stressful,” says Fintan, regaling me with a tale of being rescued by the fire brigade in Portugal when one of his lifts broke down.

“It’s also a lot of pressure when you’re working in public spaces, because if you produce something you’re not happy with, then it’s stuck there and everyone can see it.” I imagine some of my career mistakes on display to the public and cringe a little. Although that said, I’m yet to come across one of Fintan’s murals that I don’t love.

On the flip side, street art is a transient medium and something that Fintan has created could be torn down in an instant. “From a young age I have been watching my graffiti pieces disappear because they were painted over, destroyed by development or because they fell victim to the elements,” he explains. “For me, the ephemeral nature of working on the street is natural and I learn not to get attached to things. It’s humbling to watch your works disappear sometimes.”

As well as beautifying public spaces, many of Fintan’s works have political and social undertones. For instance, one of his most impactful artworks, Drowning While Standing — which stands tall in Acquapendente, Italy — is a statement on youth concerns about climate change. The image of a young man, seemingly drowning in a tank of water that surrounds his face, is highly confronting but it sends a powerful message.

“The ephemeral nature of working on the street is natural and I learn not to get attached to things. Its humbling to watch your works disappear sometimes.” — Fintan Magee

While this mural is in Italy, it’s impossible to separate its message from Fintan’s personal experience with the 2011 Brisbane floods.

“My mother’s house was flooded in 2011 and sadly some other families on our street were a lot worse off than she was. Much of my work still talks about the 2011 floods, and I want to use my personal experience to discuss bigger issues around climate change and the environment.”

Of course, not all of Fintan’s works are political; many of them are created purely for their aesthetic value. But if my experience of these murals is anything to go by, they capture the heart just as much as his didactic works; they stay with you long after you’ve passed them, and leave you wondering about the man who constantly brings such beauty into this world.

To discover more Australian artists making an impact with their work, check out Catherin Bennett and Doug Gimesy on our page Aussie Stars.