From bunk beds to canvases and mega-murals adorning hotels that bear his name, Adnate is leaving his mark.

Street artist Matt Adnate started early. “I had a bunk bed that I used to tag,” he says. “I can still remember putting a tag on it, and writing 1992 next to it. When I think back, that was when I started tagging!” He’s holding a marker – an Artline – in one hand, while explaining his two-storey-high painting of his own hand, leading up a staircase. 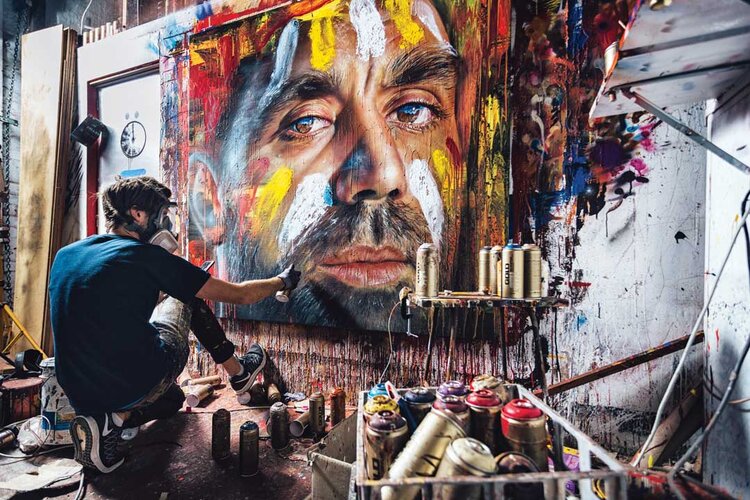 “It’s me channeling the art – what’s happening through my hand, from my brain, onto the wall. But if you have your own interpretation, you’re welcome to take that home, too,” he laughs.

He’s wearing blue chinos, skate shoes, a plethora of bracelets and a smile. I scan for paint on his white T-shirt, but can’t find any. With almost shoulder-length brown hair tucked behind his ears and half-hearted facial hair, he gives off a vibe of calm, cleverness and humility.

Yet here he is, launching The Adnate, the $90 million Art Series Hotel that’s named after him.

From bed posts to city blocks

From bed-tagging beginnings in inner-city Melbourne, Adnate matured into the mega-mural. The Adnate, unmissable on a stroll down Perth’s Hay Street, reaches 25 storeys. It’s not his first: in 2018, Adnate painted the entire side of a 20-storey 1960s housing commission block in Melbourne’s gritty Collingwood, creating the world’s largest mega-mural (at the time).

It features the faces of four of the building’s inhabitants and stands tall alongside a Copenhagen-style bike path I cycle often. The faces have become familiar and I now think that I’d recognise the woman in the headscarf (Badria Abdo), or the children (Ni Na and Arden) or Yulius Antares Taime from West Papua if I bumped into them in the supermarket. This community arts project changed the face of the commission block, and gave an insight into who lives there. The mural brought those inside, out.

Adnate works on smaller canvases, too, and says they can take the same amount of time as a mural. He’s back in Australia after working overseas, and concentrating on a canvas in his studio at Fitzroy’s street art network Juddy Roller when we first talk. “I like working in Fitzroy,” he says. “This is where I learnt to paint graffiti on the streets. I am pretty nostalgic walking around; it’s obviously one of the creative hubs of Australia.” 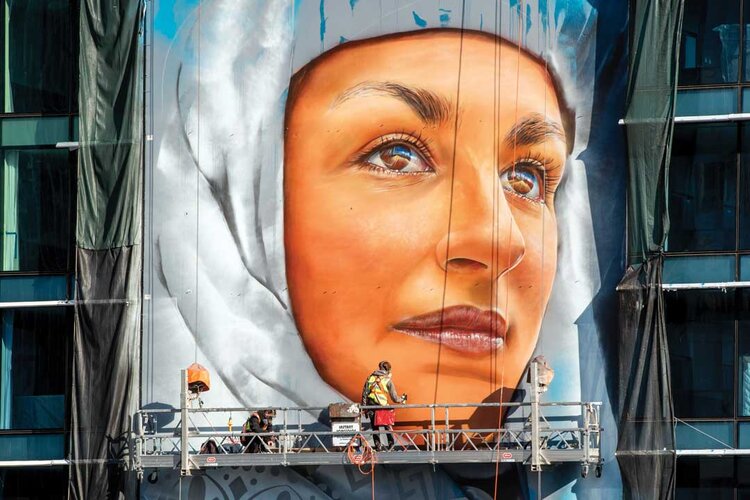 During a tour to see a handful of Adnate’s Melbourne murals, I realise that Fitzroy is literally covered in them. They’re down this lane and that. Look up and there’s another. Sometimes solo pieces; others appearing alongside other well-known graffiti artists like Melbourne’s Rone and Brisbane’s Sofles. I ask him: is it strange to see your work on the walls around you? “It’s cool to cruise down and still see my work,” he replies. “Some are painted over, some of them disappear and that’s just part of street art. It’s ephemeral.”

Adnate has spent years tagging streets and buildings. He was once caught (but not convicted) tagging: “This Wall is Boring” on a freshly painted white wall. “I was caught doing the silly, joking stuff!” he reflects now.

From words, he found faces. “When you paint graffiti you try to put expression and style into the letters,” he says. “It’s quite hard to communicate that with letters. When you’re painting faces, you suddenly have this power to communicate emotion and expression.”

For inspiration, he has Caravaggio. “He’s one of the only Renaissance artists that you’d find in a gallery that I find really inspiring. He mastered chiaroscuro – basically a contrast of having a strong spotlight on one side and a lot of it in the dark. It creates depth and power. I always try, if I can, to use that style in my work.”

Faces who deserve to be seen

Well known for his striking portraits of Indigenous people, Adnate’s painting of former AFL footballer Adam Goodes was a finalist in the Doug Moran National Portrait Prize in 2016. “I choose certain faces based on different things, including where the painting is going to be,” he says, adding that he draws from a library of photos he’s taken of people from all over the world.

“A lot of what I do is about awareness,” he reflects. “It reminds people that these people are here. Because we often choose, or society has chosen, to push them under the carpet and move on with our Western values. It’s great to be able to paint their portraits on a large scale so people are questioning and thinking about them again.” 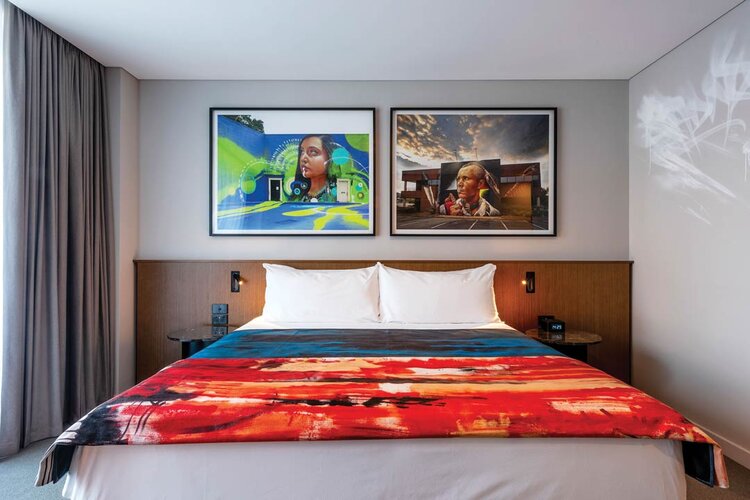 Adnate’s not afraid to revisit faces that he’s captured before. Maori woman Piiata features on The Adnate, though he previously painted her in New Zealand in 2017. He describes his choices for the facade: “The girl, for me, represents the Western culture because she’s fair-skinned, and then you’ve got the Native American boy in the middle.” An Indigenous boy features at the top. “I feel like they’re communicating together, even though they’re from different parts of the globe.”

Adnate went full-time as an artist in 2013, and is “quite selective and choosy” with his time now. He welcomed a baby with his partner, the oft-painted Jess, while working on the Collingwood mural. “I’m a dad now, which has made life very different,” he says. Plus, of course, a hotel’s been named after him.

Adnate says he was blown away when he was approached by Art Series Hotels about the Perth opportunity. “It’s surreal,” he says. “It hasn’t hit me yet.” Maybe it will when he looks in The Adnate’s bathroom and sees his own tag scrawled there? “A lot of graffiti artists would practise their tags in the mist of a shower screen,” he says. “It’s like that, but on a whole new level.”